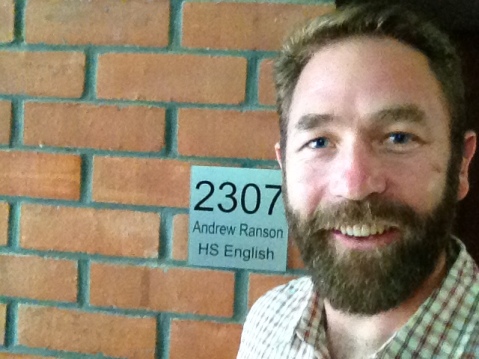 So, Andrew, what’s it like there? The whopper question. I’m not really sure yet. Here’s what I know so far — I’ve been here for six days, and my new school’s orientation schedule for us new teachers, of which there are now nearly 40, is jammed with trainings, tours, workshops and receptions. Each of the […]

I woke up laughing this morning.

Why? – because I’m in India. In my own apartment, about to start my first day of work, in India. How did I get here?

In December I took a big step in a new direction when I accepted a teaching position for the next two years in an American school in Chennai. I’d never visited the country; I hadn’t met the leaders of the school in person. A few emails, a couple of Skype calls, and that was it. They offered and I accepted.

Since December I’ve tried to imagine what it would look like, smell like, feel like once I got here. I’m still in a bit of a trance — 26 hours of flying has bent my mind a little — so I can’t really describe yet what my senses are absorbing. Officials picked me up at the airport, and at around 1:30 in the morning, let me into my furnished apartment, handed me the keys to the front door, showed me where the mid-night snack of chicken tikka, rice, and dahl was, and said they’d see me in the morning. I unpacked my bags, took a few quite moments to myself, and went to bed in my new bedroom.

The morning light came quickly today, and I needed to see the neighborhood in the light to believe that I’m here. I couldn’t stop smiling on my way to school this morning. Smiling, because, hey, I live here now. My face was pressed to the bus window as we drove to school. It’s a short, 10 minute ride from where I live. My apartment and school are on the coast — not in the downtown area — so the traffic is not bad. At least not yet. There’s a major highway that we’re near, and there don’t seem to be any traffic lights. Driving on the sidewalk is an acceptable practice but everyone slows down for the cows. Shocker.

Today was mostly orientation, and there were lots of reasons to keep smiling — each new teacher (about 25 of us total) were greeted by name by the administrative assistants when we walked in the main office. The admin assistants had each memorized the names and faces of every new teacher before we arrived. That was cool. They fed us a traditional south Indian breakfast in the cafeteria — which is served every day — and then took us on a tour of the campus. The highlight was the 80,000 square foot new theatre space, which seats 850. I’ve never even heard of a space like this in a school. More smiles and laughter.

Just a bit about the school — AISC has around 900 students preK-12, and there are over 200 people who work here in different capacities. We were introduced to the staff who run various departments of the school. All of the non-teaching support staff positions, and two of the seven director positions are held by Indians who are from this province (Tamil Nadu). I want to know what vitamins all the directors are taking because they each seemed to have more energy than the next.

There was a lot to take in today, but perhaps the last two things that are worth mentioning here for a laugh are that “beef” is available in this part of the country for sale. Note that “beef” is actually water buffalo.

Another fun fact: AISC has a QRT, or a Quick Reaction Team, as part of its campus security team. The only context in which I’ve heard about QRT is in the military. A Quick Reaction Team is usually a heavily armed squad of soldiers who sit at the ready to provide rapid support to comrades under attack. This QRT is a team of twelve retired soldiers who were commandos or  special forces during active duty in the Indian Army. They have a cell phone number. It’s now in my phone. So, in other words, I a team of commandos are a phone call away. Again, more laughing.

I can’t believe I’m in India. Somebody pinch me.