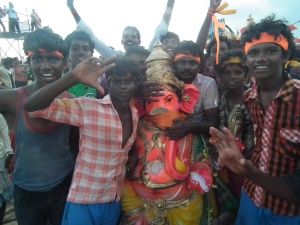 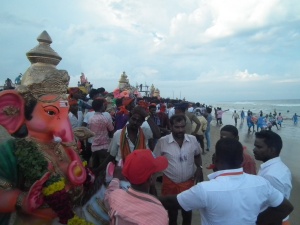 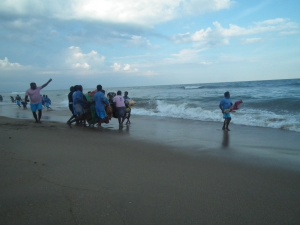 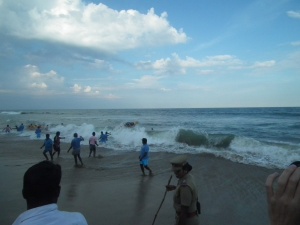 The description was just a tad short of the reality. Like so many of my experiences here so far, I was wholly unprepared for what I saw. This was after all a religious celebration. And no one does religious festivals like India.

This annual celebration brings hundreds of elephant-themed icons of all sizes to the beach in heavy-duty rigs built for hauling huge payloads. There’s one road to the beach, and these vehicles are bumper-to-bumper for two or three miles, all lined up for the same purpose: delivering the beloved Remover of Obstacles to the sea. Hundreds, maybe thousands of people are lined up on the beach to watch. The statues are carried to the water line where prayers and dancing ensue, along with lighting ritual flames. Eventually dozens of hands grab a hold of each of these huge ceremonial sculptures and one-by-one they’re flung into the crashing waves and stiff current. The statue sinks and is swept away. This process gets repeated hundreds of times in one afternoon, all with the coordination and choreography you might see when the doors at Best Buy are open to the hordes at 3:00am on Black Friday.

The idea of this all-day ceremony is to commemorate Ganesh’s mythological death and return (he offended his father, Siva, who cut off his head. Ganesh’s mother made it so he would be resurrected — he was reincarnated with his elephant noggin soon after). Accordingly, he must be flung into the sea annually in order to facilitate his return. The theme on this wonderfully strange day is letting go.

My experience on the beach that day was so fuzzy it’s taken me three weeks to write about it. I stumbled through the sand in a daze among the teeming and unpredictable crowds for a couple of hours. Waves splashed on me. Trucks nearly clipped me. The backswing of a few cops’ bamboo crowd-control sticks swooshed past my head.  Watching and taking photos, trying to process all that was happening exhausted me. There was too much to take in. Too much to process. An afternoon of perpetual paradoxes and conflicts. Moments of clarity were as rare as order and explanation. Stillness within this malestrom was nonexistent, yet I felt isolation among these thousands of other souls.

For nearly all of the afternoon on the beach I was physically uncomfortable. The worst headache I’ve ever experienced in my life emerged quickly. If you’ll forgive the pun — it felt like an elephant was stepping on my head. I was confused by the crowds, the music, the shouting, the horns from the trucks, the cheering and dancing. I was out of sorts, and I knew it, which made it slightly worse.

It’s not lost on me that I was physically uncomfortable during the ceremony of letting go.

I have not been able to let go and be fully present here — I’ve touched on this before. I think about the life I left behind in the U.S. and I conceive of what my life after India will be. I’m not alone in feeling this — my newly-arrived colleagues, especially those who are single have echoed similar awareness and processing. I’ve gained so much by coming here, and I’ve given up almost everything that was most valuable to me. I’ve let go of all the ways that I felt connected in my old life, and when living in a place that is so experientially rich and overwhelming, All human things take time, I’m told, and I know it will take time to feel comfortable and connected. I knew this would be the case when I decided to come here, but even as I knew what I was doing there was no way I could have really prepared myself this experience.

Be Here Now is a mantra that a friend offered to me recently. I don’t know  for certain if Ganesha ever said anything like this in his adventures. As the mythical scribe of the Mahabharata, I imagine a scene where someone would have asked him after a long day of work about the theme of the epic. In my mind a fatigued Ganesh trumpets out: Be here now, and wanders off to get some food. Maybe that’s what the solemn statues headed for the surf are singing to themselves beneath the banging of drums and loud chanting of his devotees. If so, I missed it. I get it now though: Be Here Now. It’s just for now. Not forever. Just for this breath.

For now, in this minute, I can be here.