This place has got Seoul 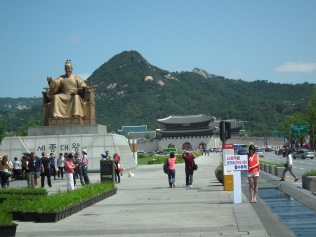 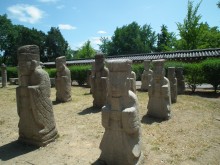 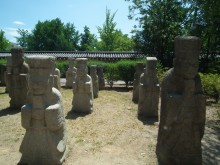 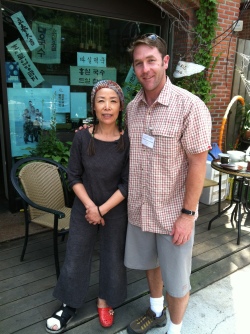 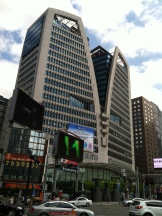 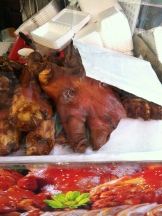 June 27th was my first full day in Seoul in almost 20 years. I visited in December 1992 with my dad and brother on an inauspicious trip that is memorable mostly for what a bummer it was — I got the flu after the first night and was in bed for most of that trip. So, this trip, which I’m on because I was selected to participate in the Korea Society Summer Fellowship, made me nervous. In my application to the Korea Society I stated that, if selected, my goals would be to bring Korean history and culture back to my students in Maryland. Secretly my real goal was to make to the second day of the trip without puking.

By this high bar of expectation, this trip is a success. I still haven’t tried eating “Korean Chinese food” which was the last thing I ate before things went south in ’92 (I have an incredible memory of what I ate just before I’ve been sick) but it’s not like I’ve been chowing down on McDonald’s, Popeye’s or KFC, which are in shocking abundance here.

Speaking of food, my first full day in Seoul started with breakfast at the hotel restaurant, which offered one of the most sublime breakfast options ever: Tater Tots. I know I just knocked American fast food, but c’mon, when was the last time you saw Tater Tots as a breakfast option. I totally went back for seconds.

The post-Tater Tot plan for the day was a city tour with the other 40 teachers participating in this program. The idea was to learn how to ride the subway, visit a palace and a museum, eat lunch together, then have some free time. Off we went in two semi-organized groups. One might think that teachers are accustomed to going on field trips, so doing something like this — taking a large group of people who don’t know each other, and who are jet-lagged, into a country where they don’t speak the language — wouldn’t be a problem. One would be wrong for thinking this. We emerged from our hotel looking more like hungry alley cats and an organized group. Teachers in larger numbers are probably a sociologist’s dream to observer because we all are accustomed to being the leader, so being a follower is pretty tough, and everyone has an opinion about what we should do next (mind you, only two of the forty have been to this country before). So getting started was fun.

Our first challenge was to buy tickets for the subway and then to ride it. Now, in a city like Washington, D.C., this task with so many people would look like the ’68 Democratic Convention in Chicago, but luckily this is Seoul and the subway system is clean, safe, on-time, and is remarkably easy to navigate, even if you don’t understand Korean. Crisis averted.

We made our way to Gyeongbokgung, also known as the Palace of Shining Happiness. This involved getting off the subway and walking several blocks to a major boulevard in downtown Seoul that is lined with important buildings like a performing arts center, industry headquarters, and museums. Gyeongbokgung is at the end of this major road, which has four lanes of traffic in each direction, divided by a median that is around 200 feet wide. This median is a  pedestrian mall of sorts, with enormous monuments to notable Korean figures. The statue of King Sejung was most impressive to me. It’s a golden stature at least 20 feet tall, sitting atop a concrete base of at least 15 feet. About a quarter mile behind him is the palace, and behind the palace are mountains, so with the width of this boulevard and the size and distance between the statues and the palace, there’s a terrific sense of space here in the middle of the city. Seoul, by the way, is heavily populated by tall buildings that stretch up to the sky and spread out like dominoes in all directions for miles. I’ve only been here a short while and I already appreciate the openness on this main artery in town.

King Sejung is honored here because he dramatically improved Korean society during the Joseon Dynasty, which lasted from 1392 to 1897. Perhaps the most audacious reform King Sejung introduced was a create a new alphabet which he created himself (according to legend). The gist of his story is that he recognized that in Korea’s agrarian society most men and women would remain illiterate as long as their written language was expressed in by Chinese characters. Yeomen farmers just didn’t have the time to spare to learn it the 3000 or so characters in the Chinese alphabet because they had to, you know, work. So in an attempt to establish a connection with his people, King Sejung invented a new alphabet of 28 unique characters. His thought was that all his people should be able to learn the alphabet and thereby read about the policies he was making, thus connecting them to his work. I know what you’re thinking: “Wow, a king who actually cared about his subjects? When did he do all this?” He rolled out the new alphabet, called Hanguel, in 1446.

King Sejung’s golden likeness proceeds Gyeongbokgung, or the Palace of Shining Happiness, as I mentioned above. So on to the palace: One of the things that makes the Palace of Shining Happiness so happy is that the palace looks like it is from a heavenly place as it is nestled at the base of a mountain and only the rocks and blue sky appear to be near it. The palace entrance is carved wood painted green, red and yellow, and is guarded by men in wonderfully bright silk robes. Their traditional outfits are replicas from the 15th century and are both imposing and inviting at the same time. The relatively low walls are made of large blocks of granite, planed smooth. Inside, the gravel courtyards are larger than a baseball field. The grounds also are home to totems from the ancestral worship that began nearly a millennia ago in Korea. These totems are simple — Korean characters burned in the base of a narrow plank of wood, with a carefully carved countenance atop each one. There’s a folk museum here, too, which has a lovely collection of artifacts from Korean culture going back 1200 years or so. Not much is in English, but even so, I got a distinct story of the Korean people going back many centuries. Their artifacts are sophisticated, beautifully crafted, and unique to Korea.

My favorite part of the artifacts on display on the palace grounds is a section outside where there are rows and rows of carved stones of men holding scrolls under their chins. Each has a stylized hat on, so that the figures are apparently identical. It’s a bit impressive to see so many of the same figures lined up together. I thought they were sages of some sort, offering to pass on Confucian wisdom.

Not exactly. They would have been educated by Confucian teachings but these statutes actually were . . .

Yes, in the good old days of Korean culture, dozens — no, hundreds — of sculptures were made of bureaucrats. To be clear, these are the equivalent to positions at the Motor Vehicles Department, or accountants in the mayor’s office in today’s America. Imagine living in a world where those jobs were envied. (And contrast it with the current mania in parts of America to do away with government). Once in Korea, and elsewhere in Asia for that matter, passing the exams to become an official of the state was a very big deal. It brought status to the individual and the family, and put one on the path to a better life. Imagine.

Outside the palace is an area where the government officials once lived. This area now is called Samcheongdong, and is known in Seoul as a funky, artsy community. There are murals on the walls, carefully-carved waterfalls, restored pagoda homes, trendy clothing shops, hand-made tea set shops, and art galleries all over. It reminded me of some of the smaller streets in Beverly Hills. We stopped just outside this area for lunch. I went with a smaller group to a restaurant owned and operated by a woman who does all the cooking and serving in a 8 – table shop. I chowed down on vegetarian bibemop made by a woman who looked to be in her 60s. The food was great, but I mention the place here because to find this small restaurant run by this woman was significant for a couple of reasons. The most obvious is that it’s amazing that she can afford the rent in this area, but the greater significance is that the phenomenon of a woman-owned business is only a generation old. Women were not permitted to work outside the home in most cases in Korea until around the 1960s, so to see her running her own shop entirely on her own deserved recognition. I’m not sure exactly what it means for Korea — for example, I’m not sure if this is common or what — but I hope that will be more clear in the coming weeks.

After lunch I teamed up with two other teachers on this trip and walked a couple miles across the city, looking a buildings, getting lost down different alleys, generally taking in the sites. The excursion came to a close at Namdaemun Market, which I’d remembered from my visit here in 1992. It’s an outdoor market that stretches for several blocks on narrow streets where you can find clothes, jewelry, trinkets, random food stalls, household items, spices, and — my personal favorite — pig’s head. There’s a lot of fresh fish, dried fish, recently-caught fish, but I knew when I saw the bisected roasted pig’s head that my work that day was done.

It was a long day, but a wonderful way to meet the city. I liked seeing the old stuff and the new parts of the city. Most of all, I loved not getting sick within 24 hours of landing. I’m looking forward to the rest of this trip!