I’ve been thinking about the order of things in the world for a couple of days now, since we visited Yangdong village, outside of the city Pohang. Yangdong is a traditional Confucian village, and has been recognized by UNESCO as a world heritage site (we’ve seen dozens of UNESCO sites on this trip — the designation is a big deal here). This village is built along four ridges on two small mountains (we’d really call them hills) and has traditional houses — complete with thatch roofs, which were outlawed by President Pak a generation ago in the rest of Korea. The houses are small, and most have a low wall around each little compound to create small courtyards for each house. At the bottom of the hills are rice paddies, and small farms are in between just about every building.

I’m not sure how many people get to see this part of Korea, so I feel fortunate for the experience, but I didn’t know exactly what we were getting into when we arrived.  Our purpose for this visit wasn’t just to see the village; we had a special audience with the Cheong Seong, or the village elder. The Cheong Seong is the 17th descendant in his family line from a once-great Korean academic. I think Cheong Seong means something like “first-born” and his role in this village is to basically look after his people, which are connected to him by family ties. He presides over nearly twenty official ceremonies here a year. One of the reasons we were coming to talk to him was he and the village are living examples of a Confucian community that goes back centuries. Because his village is a UNESCO site, their lives are on display constantly. It’s like they live in a museum and are part of the exhibit.

When we arrived at the village we walked up to his house — which is open to the public — and sat in this open receiving room that looks a little like a stage. We went up a short set of steps into a structure with a hard wood floor, a roof, but walls on only three sides. The Cheong Seong sat with us, and I got the feeling that he often holds audiences here.  Through our professor, who translated our questions and his responses, we talked with him for about ninety minutes. In our time with him he tried to explain to us what living according to Confucian principles looks like.

One of the dynamic parts of Korean culture is its relationship to Confucianism. Confucius was Chinese, of course, and he established his ethical teachings in an attempt to gain influence in the court and bureaucracy of the Zhou Dynasty in the 6th century BCE. His teachings advocated filial piety and responsible behavior to one another. A westerner might quickly recognize Confucian teachings as ethics or moral codes, and assume it’s a religion. Confucius, however, was not interested in what happened after death, and there is no deity in Confucianism — it is completely focused on human behavior in this life. Korea, in some respects, has followed a purer form of Confucianism than China over the past 15 centuries for a variety of reasons, but Confucianism here is a little bit difficult to understand and first glance. For example, in modern polls about Korean religious practices about 2% of the population claims Confucianism as their religion — Buddhism and Christianity are the top two religions — but in cultural practice, practically all Koreans follow Confucian tradition. The greatest examples of common Confucian practice are the veneration of one’s ancestors, and the deference that is always given to elders, especially one’s parents. I was led to believe, though, that most people follow this practice out of tradition rather than active adherence to a Confucian way of life. Is it possible that some Koreans follow Confucian traditions without knowing it? I’m not sure.

In the Yangdong village, Confucian living is an active decision. The Cheong Seong explained to us that decisions are made entirely by consensus, but without voting, and that there’s been a resurgence in the popularity in Confucianism — he’s seen an increase in the number of people who have returned to his village after living in more modern situations — because of the order that these practices bring to our lives. He talked about the difference between moral codes and legal codes, and intimated that the further we rely on legal codes the more we crave moral codes, hence the resurgence in traditional living in Korea.

He also made some interesting comments about spirituality. Respect for nature is important, and the spiritual, he said, might find god in nature, but the Confucian doesn’t know about the world that he or she doesn’t know. Other religions are concerned with the parts of our world that we don’t know — for example, finding the divine in everything or thinking about what happens after we die — but focusing so much on what we don’t know sometimes causes us to miss out on this world. I really appreciated this sentiment, as did many others in my group.

The most compelling part of his talk for me came when he introduced the idea of Jeong to us. He, and some other Koreans we since talked to, have said the Jeong is a special Korean quality and it can’t really be translated or explained accurately. Our professor, who has been intimately connected to Korean culture and history for several decades, gave the translation a shot. Jeong, he said, is a special type of affection and concern for others. It’s the basic quality of a human being, and our professor attested to the fact that Koreans are incredibly concerned about others. Our concern for others is what makes us human, so I thought it was interesting that Koreans who have talked to us about Jeong therefore were suggesting that Koreans are more human than others. I may be over-interpreting this idea, but it’s been fruitful to think about as we’ve gone along on this trip.

Furthermore, the Cheong Seong’s comments seem to me to be connecting the idea that respect for others and the important relationships, leads to the creation of harmony, and the perpetuation of Jeong. These are all qualities, he says, that come from Confucian moral practices. In this context, ancestor worship, which is a central tenant in Confucianism, exists for followers to remember the greatness of those who have come before us so that we don’t think we are mightier than we really are. If we think we are greater than we really are we are likely to upset harmony. It made me think of the ancient Greek idea of hubris, which is ample supply in the west, right?

I walked away from our audience with the Cheong Seong appreciating Confucian living much more. After our talk, we were free to roam the four hills of the village, so I linked up with a couple other teachers to explore. We were honored to have the Cheong Seong’s eldest son, who is 14, show us around. He is the 18th Cheong Seong, and when his father passes on he will take the role of village leader. He showed us around the village, and talked to us a bit — his English is pretty good — but the most enjoyable part of spending time with him was watching him interact with the other people in this village. They’re his people. Most were much older than me, and I liked how he bowed sincerely to each one, and each person we encountered showed him clear respect and affection in return. He was clearly endearing to the people in this village, and it made me think that perhaps I was witnessing the harmony that comes from honoring relationships properly. I was witnessing more than just order and respect. There was great affection in the interactions between the young Cheong Seong and the other villagers. For a few moments I thought it might be really nice to live in this village. 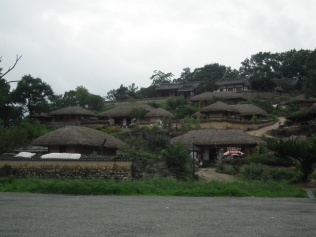 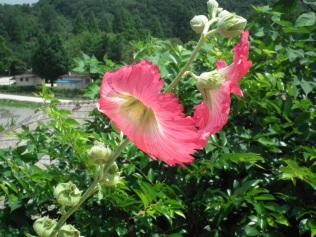 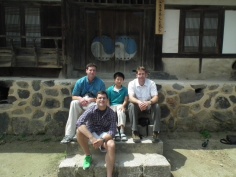 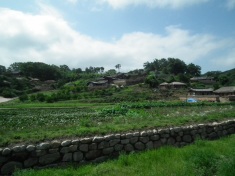