One of the earliest memories I have of my paternal grandfather is the time I learned he “made” his own bicycle when he was a kid at the junkyard near his house in Ogden, Utah.

I was young when I heard this — maybe 4 years old. I remember imagining him fashioning wood or scrap metal into the tubes that made up the frame and handlebars. I couldn’t figure out in my head how he would have “made” the wheels and tires. I was perhaps influenced by this children’s book where the main character, who was around my age at the time, “made” an airplane in the barn by himself from spare lumber. By the time I was 4 I knew Grandpa could make anything out of wood, and I naturally assumed he’s always been like that. So making a bike at the junkyard was a relatively easy act of creation for him — like God in Genesis (And on the Eighth day, the Lord made two wheels, handlebars, a frame and a seat, and it was good).  It all made sense to me. My hero-worship of my grandfather started at this point in my life.

By the time I was done assembling my bike yesterday my fingers were covered with grease it occurred to me that I probably saw Grandpa’s hands stained with the same dark grey coating from working in his garage at least as often as I saw him with clean hands.

Grandpa died at age 93 a little over 2 years ago. He was both a very humble, quiet man  and a terrific story-teller. I did an oral history project with him several years ago where he told me about the cars he owned through his life. I recorded several hours of these stories on tape. These conversations were by far the longest stretches I’d ever heard him talk. One of the things that was so great was how clear the details of his memory were. He had picture-perfect details in his descriptions — the colors of the trees and sidewalks, the location of shops and houses on the street, the direction the creek (pronounced crick) by his childhood house flowed. His articulation of his first car — a used Model T that he bought when he was a senior in high school for 25 bucks — was so vivid I could almost hear it running as he talked.

It’s funny to me how memory works. The smell of steel wrenches and grease. The tacky feel of the gritty texture on my hands.  Suddenly I’m thinking of Grandpa hitchhiking to California in 1935. He left Ogden the day he graduated from high school.There’s a John Steinbeck sort of quality to his journey in my mind — the faded colors, the urgency to find work anywhere, the resourcefulness that was perhaps matter-of-fact in that era but feels far away now. I see some parallels between my grandfather’s journey to a new place and a new life, and my own journey here, but I think he confronted much more uncertainty going West than I did coming here.

There’s a slum near my house that I decided to explore on my way back from meeting a friend for coffee. I wondered what Grandpa’d make of what I saw. Some of what I passed is outright disgusting — the open sewers, the river lined with garbage of every conceivable incarnation, water emitting a smell that defines fetid. But it’s not all gross. There are also small stands selling fruit, jasmine, electronics, and — here’s what Grandpa would like — repair shops. Over there’s a place that fixes bicycle wheels. Right here is a place that fixes motorbikes. Down there is a car mechanic, and I just passed a bunch of tuk tuk skeletons, stripped for parts to fix newer versions of those funny vehicles. The smell on this street would get to him, and there’s no way he’d be down with the food in this country, but he’d get a kick out of watching these men work. If he could get a tuna salad sandwich on wheat bread with a slice of iceberg lettuce he’d stay all day. I’d enjoy seeing him interact with these guys. Not talking really, but instead showing them some pointers and learning how to do things he’s always done with tools he probably never thought of using. He spoke the language that men who create with their hands speak, and I think it transcends barriers the rest of us run into.

It’s funny what memories a little grease will spark. 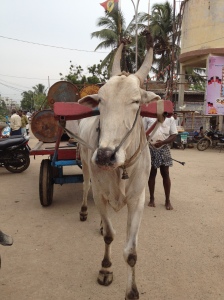