90 minutes ago I was standing in North Korea territory. How’s that for a lead?

I was trying to think of something to compete with the first sentence of the waiver I signed to visit the De-Militarized Zone at Pammunjom.  That one goes: “The visit to the Joint Security Area at Pammunjom will entail [entry] into a hostile area and possibility of injury or death as a direct result of enemy action.”

This visit for me has been a long time coming. I’ve basically been waiting 20 years for it. If you’ve followed the other stories on this blog you’ll know that I visited South Korea in 1992. I got sick though, and on the day we were scheduled to visit the DMZ I was too ill to make the trip. I stayed at the hotel watching Hong Kong MTV while my dad and brother went without me, so I was thrilled to finally go today.

You’ll also remember that I am traveling with nearly 40 other American social studies teachers, so I wasn’t the only one excited for this trip. It’s an all-day affair to get there, which is strange because Pammunjom is only 40 kilometers from downtown Seoul. If you’re wondering what took so long, you weren’t alone. I saw the schedule and asked what took so long if it’s so close but it wasn’t really explained. According to our schedule we’d leave at 8am and would return around 4:30pm. I knew from my brother’s account two decades ago that the time at the DMZ isn’t that long.

The reason, I learned, that it takes all day to visit the DMZ is there are three bus changes, four stops where we all get on and off the bus for photo ops, lunch, and three passport control checks before we got to our destination. All of these things happened between 8am and 1:30pm, and was frankly tedious. We got a special tour guide just for the day (you evidently need a special certification to go to the DMZ as a South Korean – PRK officials are afraid if any-old South Koreans were permitted at the DMZ they would defect to the North and the PRK would have to accommodate untold numbers of political refugees), and she told us that the morning would be relaxing but the afternoon would be “quite a tense time.”

I would say the morning was antagonizing – all the waiting made me feel like I was 7 and it was Christmas Eve, but the day was never-ending. Driving there took forever because we stopped every twenty minutes for a photo op. Now, I imagined that the territory approaching the DMZ would be empty. I figured South Koreans wouldn’t choose to live so close to a hostile line separating two antagonistic nations. I was wrong. There are farms and apartment buildings, strip malls, gas stations, churches, and car dealerships on the road to Pammunjom. It makes the approach anticlimactic. The photo op stops were at two separate memorial locations, each of which contained several memorials to groups of people and individuals who have died during and since the invasion that started Korean War. These memorials seem to be tourist traps now – there are amenities available that seem to cater to bus-tours, and I’ve been to so many of these types of rest stops over the years that it was hard to keep in mind that we were headed to the DMZ.

That feeling changed after lunch when we arrived that the restricted area close to the border. The tour guide’s tone changed – she dropped the abundant cheery demeanor that she offered in the morning – and a South Korean guard, with an assault rifle slung over his shoulder, came on to inspect passports. Having that gun dangle in my face ratcheted up my anxiety. The inspection was followed by instructions that we were not to take photos of anything we saw out of the windows of the bus, which included camouflaged artillery, mine fields, anti-tank obstacles and two razor wire fences. After seeing all this, my blood was pumping and the tension on the bus was palpable. Few people spoke; most had mouths agape as they stared at this strange world we’d entered.

The DMZ is three miles wide, and what surprised me is that there are quite a number of rice farms that we passed. We were told that there are South Korean farmers who work the land in exchange for government subsidies and lowered tax rates. The rice paddies have become home to an abundance of egrets – the graceful white birds that are often called cranes or storks . There are also quail, mockingbirds, and herons that roam without restriction here. The egrets, though, are the most ubiquitous. I even saw dozens sitting in trees, which I’d never seen before. In Maryland and DC they stick mostly to the marsh. It was wonderful to see so many of their bright white profiles set against the lush green background of rice paddies and abundant forest.

Once all the checks were completed and all the instructions were issued, we made our way to the Freedom House, where we lined up two-by-two. Freedom House is a three-story building that commands a view of the entire Pammunjom area. It was tough to imagine what the surrounding area looks like because low clouds impeded the view. But it’s not like I was going to admire the view anyway – I was there today to witness the excitement of a political stalemate. Here’s what it looks like: surveillance cameras everywhere, tense guards standing in defensive positions, drab buildings, concrete barriers, and the smell of fear.

Atop the Freedom House are the dozens of security cameras pointed to a corresponding building 300 feet north of it, where the PRK’s own building stands. In between the two are temporary huts, which are painted blue, and straddle the border between the North and South. The blue huts are technically conference rooms, and they are where the “negotiations” between the two Koreas have taken place over the years. The conference room in the middle of it is bisected by the border. How cute.

There’s about a hundred feet between the Freedom House and the conference huts, and when we walked out of the Freedom House, the South Korean guards on duty outside, snapped to “defensive stances” where they turned to face the lone North Korean guard 200 feet away. They remained in their stance for the entirety of our time there. We were quickly ushered into the conference room, where we stood in North Korean territory, even though it was indoors. I have to admit that in this room which was about the size of the inside of a typical mobile home, I was pretty excited. The rest of the teachers were geeked-up out of their minds, too. We had about four minutes in the room to take as many photos as we could.  Between the 40 of us, I think we took 8,000 pictures. It’s a safe bet that our poor students next year will get to look at every single photograph.

As we walked in our lines back to the Freedom House from the conference huts, I noticed that the North Korean guard examined us through high powered binoculars. I was surprised by how exhilarated I felt. I wondered if the guards there feel anything similar, or if it’s just work for them to play this game. So much of it appears to be posturing but maybe the soldiers here believe that the North Koreans could come storming across again at any moment.

Once back inside the Freedom House, and out of the eye of the guard and the dozens of cameras the North has pointed at the South, a teacher from Detroit turned to me and, with an enormous smile, said, “That was like Christmas.”

I wish the story ended there. There’s one last part that kills me. There’s a dress code here – to visit you are prohibited from wearing blue jeans and shirts with logos because those are symbols of capitalism, and the PRK would feel antagonized to see visitors from the ROK decked out in such garb.  It was hard for me to believe this was a real thing, but it is a very big deal. So anyway, capitalism is an issue here, right? Check this out: We returned to the so-called visitor center, where there actually is a gift shop. In less than 15 minutes in that shop, my group and another bus-load of visitors that went through the visit with us probably spent $2000 on mementos. Ah, capitalism. I can’t stop laughing when I think about this. 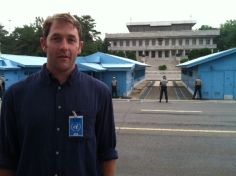