We’re in day two of a five day “field trip,” where we are touring the southern parts of the Korean peninsula. Seoulites evidently refer to anything outside of the Seoul as the “country side,” which is a bit like called northern New Jersey rural compared to Manhattan. There is noticeably more lush, green space along the highways as it is the rainy season and fields are reflecting the ample watering their receiving. Korea is a mountainous land, so rolling hills there and jagged contours there are common. It’s beautiful land to look at, even if visibility is limited due to smoky rain clouds congregating on low mountain tops.

We’ve seen a lot of museums in our two days on the road so far. There’s been visits to temples, tombs, a National Museum at Gyeongju, and a printing-press museum. Our time on the bus — three or four hours a day — is narrated by an American professor who is an expert on Korean culture and history. His knowledge is impressive as he can go on and on with personal and historical anecdotes, and he’s got a sense of humor, too. One example came today. Now the professor is he’s Mormon, so using profanity isn’t on the spectrum for him, but today we were about to visit a site where there once was a Buddhist temple of incredible size. It was a walled compound of several hundred acres that included statues dozens of feet tall, a temple bell that weighed at least 30 tons, and a 9-level pagoda over 60 meters tall (one level for each of the kingdoms in Korea and China it wished to conquer). To emphasize the size, scope, and importance of this temple, which was destroyed perhaps 800 years ago, our professor called it a “Joe Biden Big Deal.”

I had to think about this one for a minute. I was pretty excited to be at the site. The central point of the pagoda, where the corner stone was laid, is perfectly inline with the mountain peak due south, another due east, another due west, and, of course, the last one due north. The temple here was probably the center of political and social activity during the Silla dynasty. The Silla dynasty was the first to unify the Korean peninsula, which was no small feat. The Silla dynasty collapsed many centuries later, and the temple was probably burned down by the invading Mongols. It’s likely that they or the Joseon Dynasty, which was Confucian and anti-Buddhist, melted down the enormous bell and made cannon out of it. To destroy this temple was a significant symbol of power. The temple here wasn’t a perfunctory structure; it was perhaps the center of the Korean world a thousand years ago. To walk where we walked would have been a big deal, or as Joe Biden said a few years ago, “A big f–ing deal.”

Then it hit me: our professor doesn’t swear. Instead, he invokes the name of one of the great swearers in our time for effect, and hence we have  a “Joe Biden Big Deal.” Now what’s not to like about that kind of story?

All that remains of the once-glorious temple are the pillar footprints in the ground. Walking among them today in the rain made me feel like I’d come upon giants’ footsteps in the sand and the beach. I could only imagine what was once here and marvel at the imaginings. It made me think if I ever had a time machine, I’d really like to come back here to see what it looked like with my own eyes. I’ll bet that Biden would appreciate seeing it, too. 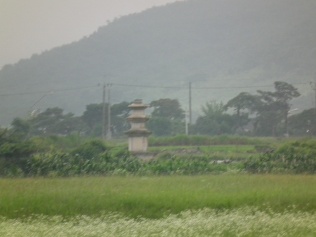 A pagoda in the distance is a sign of devotion, but can’t express what once stood here.

A colleague stands at the ruins of the perimeter temple wall, taking in the expanse of the once-great temple.

Blocks in the ground can only suggest to us what we’re missing.

One of 36 pillars that held up the Buddha sanctuary roof.

Buddha’s statue, and two others, once stood here, perhaps with this gesture. Look at the size of the bases of the three statues!

The center stone from the once-towering pagoda.